The computer's master control program. When a computer is turned on, a small "boot program" loads the operating system. Although additional system modules may be loaded as needed, the main part, known as the "kernel" resides in memory (RAM) at all times.

User Interface (GUI and Command Line)
All graphics based today, the user interface includes the windows, menus and interaction method between the user and computer, which is either a mouse, trackpad or touchscreen. Prior to graphical user interfaces (GUIs), all operations were performed by typing commands. However, the command line is by no means extinct. It is included in all major operating systems, and technical operations are commonly executed from the command line by programmers and power users. Command line statements often get the job done more efficiently than with a GUI, and they are easily grouped in a file and executed all at once. See batch file, power user, PowerShell and shell script.

Shells, Skins, Apps and Utilities
Operating systems may support optional interfaces. Although the overwhelming majority of people work with the default interface, different "shells" offer variations of functionality, and "skins" provide different appearances. In addition to the internal functions listed below, operating systems come with a built-in backup system that can be configured to run when convenient, as well as a variety of applications including a Web browser, email client, text editor and media player. Utility programs are also provided that test and format storage devices and perform diagnostics. See GUI, shell and skin.

Job Management
Job management controls the time and sequence that applications or utilities are run. For example, backup and OS updates can be scheduled to run in the middle of the night. The execution of scripts throughout the day or at the end of a period is common in the server world.

Task Management and Task Switching
Multitasking, which is the ability to simultaneously execute multiple programs, is available in all operating systems today. Critical in the server and mainframe environment, applications can be prioritized to run faster or slower depending on their purpose. In the desktop and mobile worlds, multitasking is mostly "task switching," which keeps applications open so users can bounce back and forth among them. See multitasking.

Data Management
Data management keeps track of the data in storage (disk or SSD). The application program deals with data by file name and location within the file. The operating system's file system knows where the data are physically stored (which sectors), and interaction between the app and operating system is through the programming interface (API). When an application needs to retrieve or save data, it makes a call to the file system, which is in charge of actually opening, reading, writing and closing files. See SSD, API and file system.

Device Management
Device management controls peripheral devices by sending them commands in their proprietary machine language. The software routine that deals with each device is a "driver," and the OS requires drivers for each of the peripherals attached to the computer. When a different type of peripheral is attached to a desktop computer, that device's driver must be added to the OS if not previously installed. There are no device changes in a phone, tablet or laptop. See driver.

Security
Operating systems provide password protection to keep unauthorized users out of the system. If activity logs are maintained, they provide time accounting for billing purposes. Backup and recovery routines enable starting over in the event of a system failure.


In the 1950s, there were no operating systems or complex disk sector issues. Programmers wrote their own input/output routines to read and write magnetic tape, where all records are stored sequentially. When disks came on the scene several years later, it became essential to have a separate function to manage them as data were added and deleted throughout the disk platters. In addition, running more than one application at a time (timesharing and multitasking) required a control program to keep track of everything. Thus, the operating system was born. Today, most all computing devices no matter how small or large use an operating system in some form.


The primary computer operating systems are Windows Server, Windows, macOS, the countless versions of Linux and Unix, IBM i (IBM midrange) and z/OS (IBM mainframes). DOS is still used for some applications, and there are several more (see real-time system and embedded system). Smartphones use iOS and Android, while tablets use Windows, iPadOS and Android. See Windows, iOS, iPadOS and Android.

The operating system is the master control program in the computer.

The operating system communicates with the computer's peripherals via the software drivers for the devices. Older PCs had other drivers (see legacy driver). 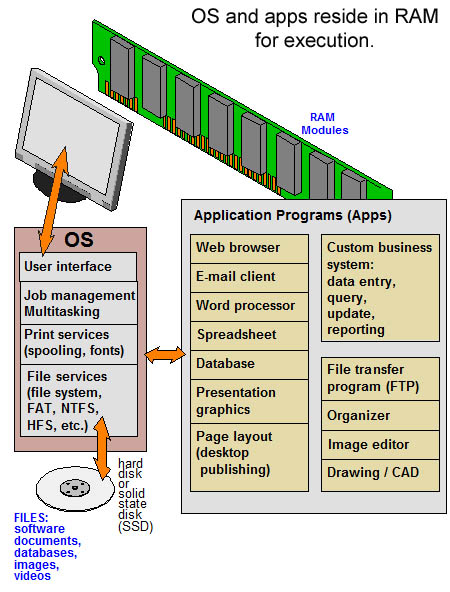