(Application Programming Interface) A language and message format used by an application program to communicate with the operating system or some other control program such as a database management system (DBMS) or communications protocol. There are countless other APIs that applications use to access processing functions or interact with external data. For example, a stock market app uses an API to access a data feed on a server. A weather app uses an API to connect to a current weather source. Fitness apps use an API in the OS to interact with the pulse monitor in a phone or watch.

Operating system APIs are implemented by writing function calls in the program to display a window, menu or button on screen as well as the data. Other than the business logic, programmers do a lot of API coding, with each environment (Windows, Mac, iOS, Android and Linux) dramatically different from the other. An iPhone programmer has to learn an entirely new set of APIs to be an Android programmer. See integrated development environment, function and interface.

APIs Become Obsolete
Operating systems are being upgraded all the time with new functions, and vendors discontinue support for very old routines. The old APIs no longer work with the new OS version, and the program has to be revised. Business organizations can put off installing the latest OS for years as long as they run older applications tied to the older OS. However, developers have little choice because they need to be compatible with the new OS versions in use. In addition, if the application is offered in the vendor's online store, a version of the app using the new APIs becomes mandatory after a while. 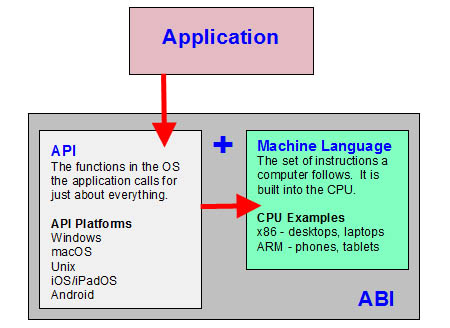