A computer-controlled car that drives itself. Also called an "autonomous vehicle" and "driverless car," more than two dozen companies have been developing self-driving cars. As of 2020, Alphabet's Waymo, GM's Cruise, Uber, Baidu and Toyota have invested the most capital. Even Apple is involved (see Apple Car).

All new vehicles today have some automated functions such as adaptive cruise control and lane assist (see automotive safety systems). Tesla's AutoPilot offers partial self-driving as long as the human driver is attentive (see image below).

The Concept Goes Back Decades
Self-driving cars date back to the 1939 World's Fair in New York when General Motors predicted the development of radio-controlled electric cars. As TVs and modern appliances emerged in the 1950s, more predictions of self-driving cars debuted. In the 1980s, experiments detecting the lines in the road were performed in the U.S. and Europe.

DARPA Started It
The U.S. Defense Advanced Research Projects Agency (DARPA) jump-started the industry. In 2004, it offered rewards for the winners of a 150-mile self-driving race in California's Mojave Desert. No vehicle completed the course, but 22 out of 23 finished the next race in 2005 with more curves and narrower roads. In 2007, six teams completed a 60-mile run through urban streets. Nevada was the first state to legalize self-driving cars in 2011.

Why Self-Driving Cars?
Accident avoidance is the major incentive because computers can respond to dangerous situations a thousand times faster than a human. In addition, people can arrive more relaxed after a long trip. Vehicles can travel closer together and operate more economically when moving in a smooth flow of traffic. The ultimate manifestation is the reduction of vehicles. For example, self-driving taxis may replace a second car, or a family's self-driving car could take everyone to work, pick them up and be available during the day for other use; a better allocation of resources than the tens of millions of cars sitting idle in employee parking lots. Of course, fewer vehicles has other implications (see computer ethics).

Not Foolproof
If thousands of lives can be saved each year, self-driving cars will be a huge benefit. However, there are situations that are not so straightforward. For example, when temperatures fall below freezing, daily commuters know where the tricky spots in the road are and slow down. Detection systems have yet to meet every challenge perfectly such as potholes full of snow or rain at night. Interpreting hand signals from a policeman or road worker will take time to detect properly.

Google Self-Driving Car Project
Although most automobile companies are in some stage of R&D for self-driving cars, Google undertook its own project in 2009. Seven years later, Google spun off the technology into Waymo, a new Alphabet division. See Waymo and Alphabet.

Self-Driving Taxis Are Here
In 2016, Uber and nuTonomy began self-driving taxi trials in Pittsburgh and Singapore respectively. Engineers were present in the vehicle to take over when necessary, but drivers did not talk to passengers in order to give them the full driverless experience. In late 2020, Waymo offered self-driving taxi service in Phoenix, Arizona, and just like Uber and Lyft, people can schedule a ride on their Waymo app. See Uber and autonomous vehicle levels.

The Transition to Driverless Cars
Along with the huge technology challenge, state laws are also being changed. Whether self-driving cars become mainstream in a few years remains to be seen. However, predictions abound that 20% or more of all vehicles wordwide will be driverless by 2040. As that unfolds, the infrastructure is also expected to accommodate this change. For example, road signs, traffic lights and the very roads themselves are expected to communicate with the vehicles. In addition, personal ownership of family cars is expected to decline (see TaaS). 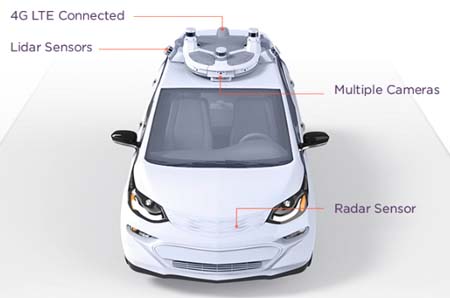 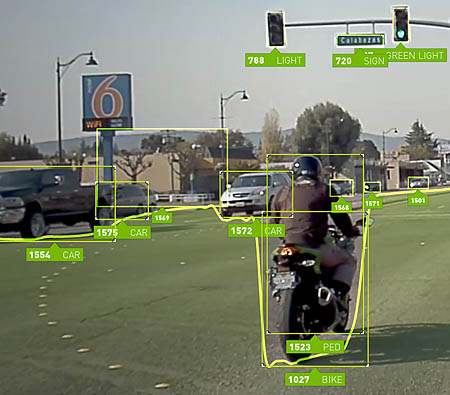 Self-driving computers are processing trillions of operations per second to identify and catalog their surroundings as in this example. See NVIDIA DRIVE. (Image courtesy of NVIDIA Corporation.)

The Tesla shows the driver what it detects in the environment. The first self-driving option in a production car, drivers must put their hands on the wheel at least once every 30 seconds. Autopilot alerts the driver when cars are too close, and it automatically changes lanes and parallel parks. See semiautonomous vehicle. 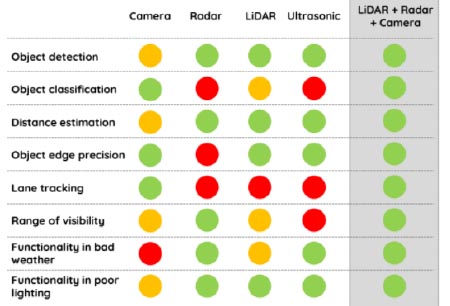 Self-driving cars use a combination of cameras, radar, LIDAR and sound to detect the lanes and objects on the road. This shows their usefulness from worst (red) to best (green). See radar and LIDAR. (Image courtesy of Phantom Intelligence, www.phantomintelligence.com) 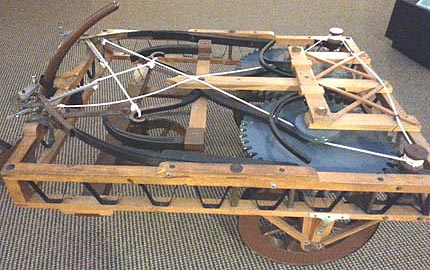 Hardly self-driving but a first in automated transportation in 1478, Leonardo da Vinci used coiled springs to build a self-propelled vehicle. Very revolutionary, it never worked all that well. This replica is in IBM's conference center in Palisades, New York.