The division of Alphabet involved in self-driving car technology. Standing for the "Way Forward in Mobile," Google formed Waymo in 2016 after seven years of self-driving R&D. If it seems strange that a search engine company is a major pioneer in driverless cars, their effectiveness and success lies greatly with the software algorithms.

Since 2009, some 23 Google-equipped Lexus SUVs have been driven by Google employees mostly in Mountain View, California but also in Austin, Texas, Kirkland, Washington and Phoenix, Arizona. With more than two million self-driving miles, there were only a dozen minor accidents, which were caused primarily by other drivers who rear-ended the Google car. However, in 2016, a Google car changing lanes hit an oncoming bus at low speed. Fortunately, there were no injuries.

Waymo has partnered with Chrysler and Jaguar, and starting in 2017, the technology debuted in a fleet of Chrysler Pacifica minivans. A deal with Honda is also expected as talks have been ongoing. See Alphabet and self-driving car. 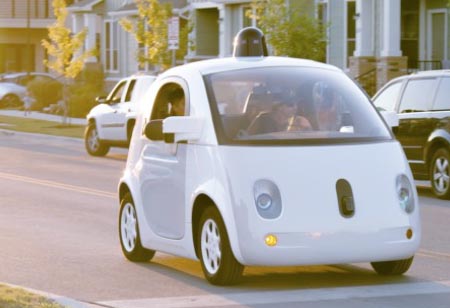 In 2014, Google designed a prototype self-driving car from scratch to further test the technology. These vehicles have no steering wheels or pedals. In 2015, they joined the Lexus fleet in Mountain View and Austin. (Image courtesy of Google, Inc.)