A tablet that runs the Windows operating system. Windows tablets use an x86 CPU and run the same applications that any Windows desktop or laptop computer does, providing there is sufficient CPU power, RAM and storage. Although tablets are increasingly rivaling laptops in performance, gaming enthusiasts prefer a high-end Windows machine (see gaming PC). Scientific and intensive graphics applications require a high-powered desktop computer. See x86 and Windows.

Tablet or Laptop?
Unlike iPads and Android tablets, which are generally stand-alone panels, Windows tablets often come with a keyboard that may or may not be removable. As a result, Windows tablets and Windows laptops have converged (see hybrid laptop and convertible laptop). Like any portable device, the difference is weight, screen size, CPU speed, RAM and storage.

Many Vendors
There are numerous vendors of Windows tablets, and Microsoft sells its own line under the Surface brand (see Surface versions). For Windows tablet history, see Tablet PC. See tablet. 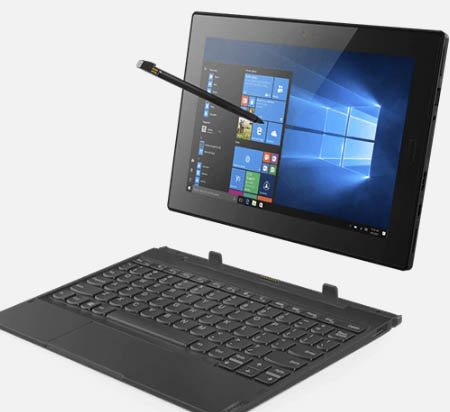 Essentially, Windows tablets with removable keyboards are the same as hybrid laptops. This 10.1" Windows 10 tablet from Lenovo has 128GB of solid state storage and comes in models with Wi-Fi only or Wi-Fi and LTE. (Image courtesy of Lenovo, www.lenovo.com)