(The Onion Routing protocol) A method for transmitting data anonymously over the Internet by routing messages through a decentralized network. Tor is like a VPN (virtual private network), except that all data is relayed through three or more servers rather than just one, and both source and destination addresses of the packets are never available to any single server. The worldwide Tor network comprises thousands of Tor servers (Tor nodes) that are run by volunteers. See VPN and I2P.

Tor Is "Onion" Routing
While Tor can be used to retrieve any website, all the sites on the Dark Web use the .onion domain, and Tor is used to access them. See Dark Web.

Tor is a modified Firefox browser for Windows, Mac and Linux. When run, it sets up a connection to the Tor network, and all Web requests are re-routed to hide their identity. For routing details, see onion routing.

Government Initiated
In the 1990s, Tor was initially explored at the U.S. Naval Research Lab (NRL), and in 2002, it was released under a free and open source license. Within a year, there were a dozen nodes. The Electronic Frontier Foundation (see EFF) funded development, and the Tor Project became a nonprofit in 2006.

Tor is extremely beneficial for people in countries with information restrictions. During the Arab Spring, Tor gave people in Middle Eastern countries access to blocked websites. Although there are circuitous ways to get around it, the Chinese continue to block Tor entry and exit points. For more information, visit www.torproject.org. See anonymous Web surfing and Freenet. 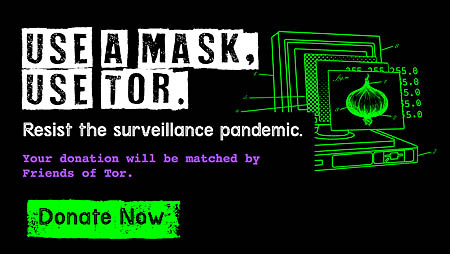 An imaginative plea for donations during a pandemic, the analogy is rather accurate.

An onion is part of the Tor logo, because onion routing "peels apart the encrypted layers of the message" like an onion. See onion routing.