(3) (Programmed Data Processor) A minicomputer family from Digital Equipment Corporation (DEC) that started with the 18-bit PDP-1 in 1959. Its $120,000 price was much less than the million-dollar machines of the time, and 50 units were built.

The PDP Was "The" Minicomputer
In 1965, Digital legitimized the minicomputer industry with the PDP-8, which sold for about $20,000. By the late 1970s, the PDP-8 processor was put on a single chip and used in DECmate workstations. Other PDPs were built, including 12-bit, 18-bit and 36-bit machines, the larger ones evolving into DECsystem models.

In 1970, Digital introduced the 16-bit PDP-11, which became the most widely used minicomputer with more than 50,000 systems sold. The PDP-11 was a very sophisticated machine for its time. In 1977, the VAX series was introduced, but PDP machines lingered on for many years.

Why Such an Odd Name?
The company wanted to downplay the word "computer," because in the 1940s and 1950s, computers were huge multi-million dollar machines. Thus, "programmed data processor" was chosen to highlight a new architecture.

The PDP-5 was one of Digital's early computers. The PDP series pioneered the minicomputer industry. (Image courtesy of Digital Equipment Corporation.) 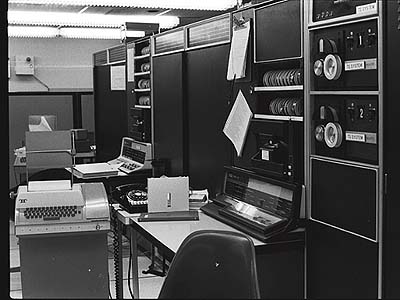 The first email message was typed into a Teletype terminal connected to a PDP-10 in the back of this room. It was transmitted via ARPAnet to the PDP-10 in front. DEC engineer Dan Murphy took this photo in the Bolt, Beranek and Newman datacenter. See ARPAnet, DEC and PDP. (Image courtesy of Dan Murphy, www.opost.com/dlm)