In the analog world of continuously varying signals, a transistor is a device used to amplify an electrical signal to produce sufficient power to drive a speaker. In the digital world, a transistor is a binary switch and the fundamental building block of computer circuitry. Like a light switch on the wall, the transistor either prevents or allows current to flow through. A chip can contain from thousands to billions of transistors, and the elements within the most advanced transistors are measured in billionths of a meter (see process technology). See CPU and SoC.

Made of Semiconductor Material
The active part of the transistor is made of silicon or some other semiconductor material that can change its electrical state when pulsed. In its normal state, the material may be nonconductive or conductive, either impeding or letting current flow. When voltage is applied to the gate, the transistor changes its state. To learn more about the transistor, see transistor concept and chip. See active area, phototransistor and High-K/Metal Gate.

Transistors are wired in patterns that make up logic gates. Gates make up circuits, and circuits make up electronic systems (for details, see Boolean logic and Boolean gates). 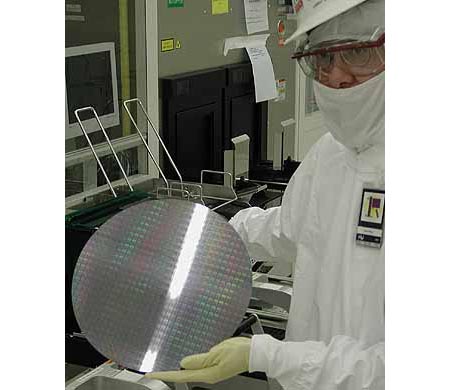 Most of the transistors in every chip on the wafer are created at the same time. A 300mm wafer like this can hold hundreds and thousands of dies (chips), which means billions and trillions of transistors are fabricated simultaneously. See wafer. (Image courtesy of Intel Corporation.)

Instead of only one transistor per package, IBM's advanced engineering placed three transistors on a single module for its System/360 family in 1964. With the cover removed, the three are plainly visible. See active area. (Image courtesy of IBM.) 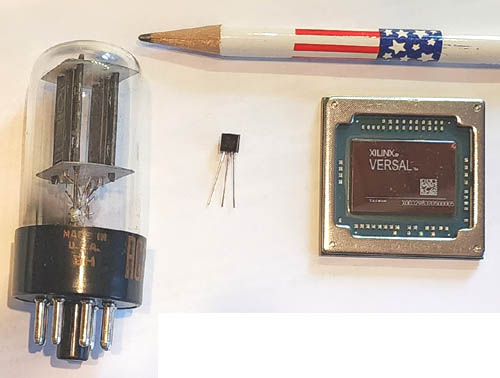 Computers in the 1940s and mid-1950s used vacuum tubes (left) for on/off digital switches, but by the late 1950s, discrete transistors (middle) replaced them. Integrated circuits emerged in the 1960s and evolved into chips with millions and billions of transistors; for example, the chip (right) has more than 35 billion (see Versal). The pencil is added for size comparison. See integrated circuit. (Image courtesy of Xilinx.)