A device that generates sound by creating waveforms electronically (such as subtractive or FM synthesis) or from stored samples of musical instruments (wave table synthesis). Although rudimentary electronic instruments were developed as far back as the 1920s, it was Robert Moog (pronounced "Mogue") who popularized the synthesizer in the 1960s. The term itself was coined after his devices, which were the first to combine an electronic (piano-style) keyboard with extremely flexible sound creation capabilities. In the 1970s, the Minimoog portable synthesizer was widely accepted. See MIDI and speech synthesis. 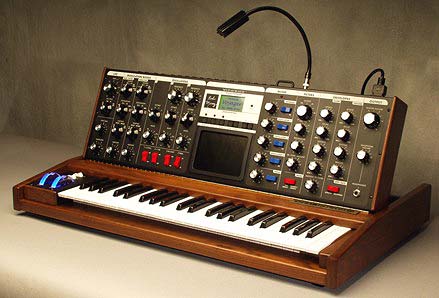 Looking very much like the original portable device of the early 1970s, this 21st century transformation of the Minimoog Voyager Signature Edition synthesizer was introduced in 2002. (Image courtesy of Moog Music Inc., www.moogmusic.com)