(Musical Instrument Digital Interface) A standard protocol for the interchange of musical information between musical instruments, synthesizers and computers. MIDI was developed to allow the keyboard of one synthesizer to play notes generated by another. It defines codes for musical notes as well as button, dial and pedal adjustments, and MIDI control messages can orchestrate a series of synthesizers, each playing a part of the musical score. MIDI Version 1.0 was introduced in 1983.

Not Sound, The Notes
MIDI does not record analog or digital sound waves. It encodes keyboard functions, which includes the start of a note, its pitch, length, volume and musical attributes, such as vibrato. As a result, MIDI files take up considerably less space than digitized sound files. Since the advent of the General MIDI standard for musical instruments, MIDI has been widely used for music backgrounds in multimedia applications due to its space-saving feature. It is MIDI technology you might be hearing as the latest mobile ring tone or on a thrill ride or attraction at a theme park. However, MIDI is only for music, not voice. See General MIDI.

Editing Is Different
MIDI recordings are edited in an entirely different manner than conventional recording; for example, the rhythm can be changed by editing the timing codes in the MIDI messages. In addition, the computer can easily transpose a performance from B major into D major. Such editing would be extremely difficult with recorded sound waves. For more information, visit www.midi.org. See MIDI sequencer, MIDI patch, MIDI voices, MPU-401, wavetable synthesis, FM synthesis and sound card.

This shows musical notes stored in MIDI compared to digital audio. MIDI is musical notation, whereas digital audio is a sample of the actual waveforms. For example, a 42KB Wave file would hold two seconds of audio, whereas a 42KB MIDI file could hold five minutes worth of music. This illustration is conceptual (the binary codes are not real). 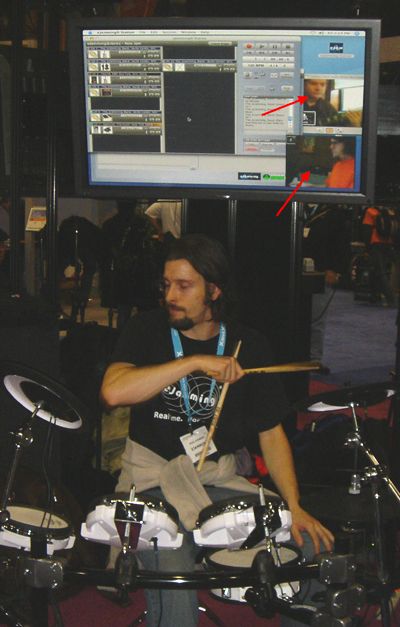 This drummer is playing with two musicians in different parts of the country. They all hear the combined sound and see each other on screen (upper right). Starting in 2005, eJamming (www.ejamming.com) opened a new world for musicians with MIDI instruments. Just like online gamers match their wits with players around the world via the Internet, musicians can jam with fellow artists in different venues. Due to MIDI's concise format, the "virtual band" has emerged.