A semiconductor circuit that holds data until purposely erased. Flash memory is the predominant technology for solid state storage today because it is not mechanical and can be erased like a hard disk, although not as quickly.

Before Flash Memory
The precursor to flash memory was the EEPROM chip, which was erasable in place. EPROMs (single "E") had to be erased manually, and ROM and PROM chips hold content permanently. See storage vs. memory, flash memory, ROM, PROM, EPROM, EEPROM and SSD. 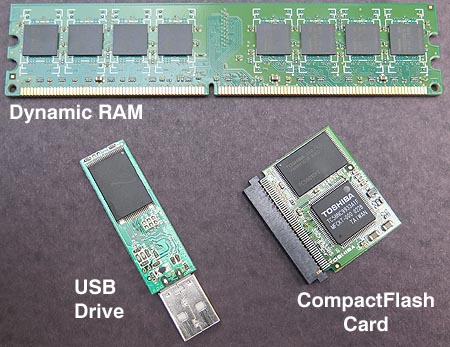 All chips resemble each other on the outside, but they are different on the inside. Dynamic RAM does not hold its content. However, the flash memory chips in the USB drive and CompactFlash card do. RAM modules may have cases covering the chips, but many do not as in this example. To expose the chips, the USB and CompactFlash cases were cracked open. See memory module, USB drive and chip.