(Erasable Programmable Read Only Memory) A rewritable storage chip that held its content without power. EPROM chips were written on an external programming device before being placed on the circuit board. For reprogramming, the chip was extracted from the circuit board and placed under an intense ultraviolet (UV) light for approximately 20 minutes (see ultraviolet light).

No longer used, EPROMS evolved into EEPROMs and flash memory, both of which can be erased in place on the circuit board. See EPROM programmer, EEPROM, flash memory and memory types.

The floating gate could hold the charge for more than a decade or until the device was erased; however, EPROMs only supported a few hundred erase-write cycles.

An EPROM cell acted like a permanently open or closed transistor. Charging was accomplished by applying voltage to the control gate. When the "floating gate" was charged, it impeded the flow of electrons from the control gate to the silicon, and the 0 or 1 was determined by whether the voltage on the control gate was blocked or not. 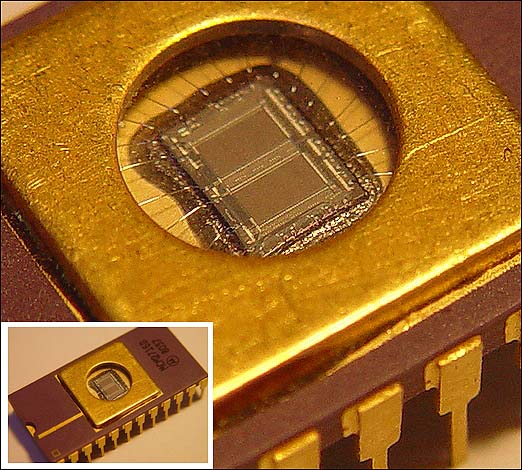 EPROM packages had a glass cover so that the chip could be exposed to ultraviolet (UV) light for erasure. The ceramic chip package had a small quartz window for re-programming, and the package was more costly than other housings. The window was covered with opaque, sticky tape.