Hardware or software that plays audio files encoded in MP3 and other audio formats. On the software side, applications that reside in the user's computer, such as iTunes, Windows Media Player and RealPlayer, are used to organize a music collection, play audio files and rip music from a CD. Software players may also provide access to Internet radio stations and other streaming audio sites (see media player).

Hardware Players
Obsolete today because of the smartphone, hardware players used solid state flash memory to hold songs downloaded from an online store or the user's computer. Although discontinued, Apple's iPod was long the industry leader, but players have came in all sizes, with some units including FM radio (see iPod).

Built into Smartphones and Tablets
A music player app comes with all smartphones and tablets, as well as many satellite radio receivers and in-dash navigation systems. Offering the same capability, these devices made stand-alone hardware players irrelevant. 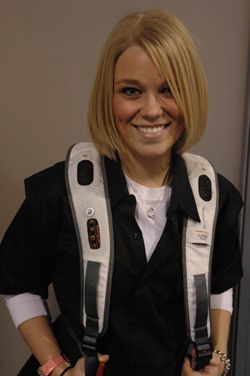 An industry of accessories was created to carry and operate a music player. Skullcandy's LINK Packs held waterproof speakers in the straps along with a microphone for cellphones.

The metallic-coated index finger and thumb tips made electrical contact between the user and the iPod's click wheel. (Image courtesy of 4sight Products Inc.)