An earlier portable music player that supported the high-resolution FLAC lossless music format. Founded by Canadian rock musician and environmentalist Neil Young, more than six million dollars was pledged by April 2014 on Kickstarter to fund the project. Pono is Hawaiian for "pure" and "righteous." In 2017, the device was discontinued due to the elevated fees for high-res formats. See FLAC and high-resolution audio. 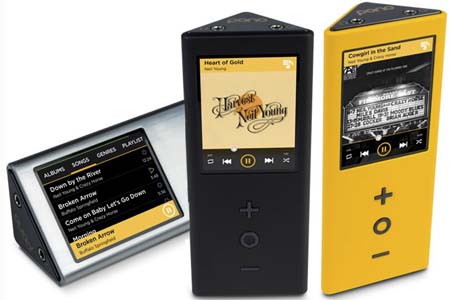 Easily identified by their triangular shape, Pono players were used by music enthusiasts who appreciated high-quality audio. The songs were downloaded and played locally in the device. (Image courtesy of PonoMusic.)