The Mini Laptop/Netbook
In the 2007 time frame, subnotebooks called "mini laptops" and "netbooks" made their debut, the latter term coined by Intel for machines that used its Atom processor. Weighing up to three pounds, mini laptops/netbooks have screens from 8 to 10" (see netbook). For features of portable computers, see laptop. See ultrathin laptop, notebook and Ultrabook.

In 1998, Sony popularized the subnotebook class with its VAIO (pronounced "vy-o") 505G at three pounds and less than an inch thick. To reduce traveling weight, floppy and CD-ROM drives were external, and a docking station was included. (Image courtesy of Sony Corporation.) 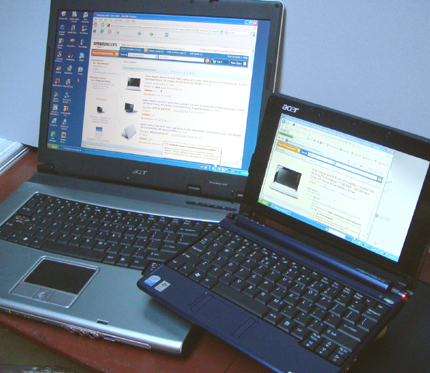 The Acer netbook on the right sports an 8.9" screen compared to 15" on its big brother to the left. Netbooks sacrifice keyboard and screen size for portability.