(MicroElectroMechanical Systems) Tiny mechanical devices that are built onto semiconductor chips and are measured in micrometers. In the research labs since the 1980s, MEMS devices began to materialize as commercial products in the mid-1990s. They are used to make pressure, temperature, chemical and vibration sensors, light reflectors and switches, as well as accelerometers for vehicle airbags, smartphones, tablets and games (see accelerometer).

MEMS and MOEMS
When optical components are included in a MEMS device, it is called a micro-opto-electromechanical system (MOEMS). For example, adding a photonic sensor to a silicon chip constitutes a MOEMS device. See micromachine, MEMS mirror, DLP and optical switch.

MEMS vs. Nanotechnology
Sometimes MEMS and nanotechnology are terms that are used interchangeably, because they both deal with microminiaturized objects. However, they are vastly different. MEMS deals with creating devices that are measured in micrometers, whereas nantotechnology deals with manipulating atoms at the nanometer level.

In an all-optical switch, MEMS mirrors reflect the input signal to an output port without regard to line speed or protocol. This technology is expected to be the dominant method for building photonic switches. 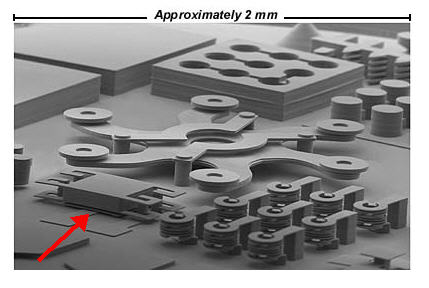 Microfabrica's EFAB system was the first MEMS foundry process to accept CAD files as input, turning customer designs into micromachines much faster than traditional methods. EFAB builds the devices one metal layer at a time. In this image, the square at the top is a microfluidics device with internal passageways used for a "lab on a chip." The multi-arm device (center) is a fuel injection nozzle. Bottom left is an accelerometer, and bottom right is an inductor used in RF circuits. (Image courtesy of Microfabrica Inc., www.microfabrica.com) 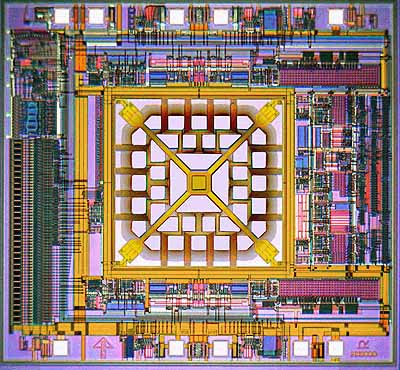 MEMSIC's dual-axis thermal accelerator is a MEMS-based semiconductor device that works conceptually like the air bubble in a construction level. The square in the middle of the chip is a resistor that heats up a gas bubble. The next larger squares contain thermal couples that sense the location of the heated bubble as the device is tilted or accelerated. (Image courtesy of MEMSIC, Inc.)