(1) (Data Loss Prevention) Systems that monitor data to prevent their dissemination into unauthorized hands. DLP may be implemented in stand-alone computers in the network that analyze the traffic, while software in user's machines and servers evaluate the use of data being read on the local drives.

(2) (Digital Light Processing) A data projection technology from TI that produces clear images on screens in lit rooms. DLP is used in projection devices that weigh only a few pounds to movie theater projectors. It was also used in earlier rear-projection TVs.

It's All in the Mirrors
DLP uses a spatial light modulator called a "Digital Micromirror Device" (DMD). The DMD is a memory chip covered with hinged, microscopic electromechanical mirrors, one for each pixel on the screen. For example, a 1280x1024 resolution uses more than a million "micromirrors," which tilt 10 degrees forward or backward, acting as light switches. Each mirror is 16 micrometers square, and all of them fit on a CMOS chip the size of a postage stamp.

Tilt and Oscillate
The state of each memory bit (0 or 1) in the video frame causes the mirror to tilt in one direction to direct light through a lens to the screen, or tilt in the other direction to deflect it. Gray scale is created by causing the mirrors to oscillate some number of times within each 16 millisecond video frame.

On one-chip projectors, color is achieved by beaming red, green and blue light onto the chip sequentially. The light source can be a mercury vapor lamp shining through a spinning color wheel or light from three LEDs. The oscillating mirrors create the shades of color. Offering longer life and greater contrast, LED-based DLPs began to ship in 2006. Three-chip units use three sets of mirrors, one each for red, green and blue, and the resulting three images are combined for projection. See DLP projector, MicroTiles, Wobulation, microdisplay, 3LCD and rear-projection TV.

The computer sends video frames to the DLP chip, which generates the data for moving the mirrors. The light source is either a single mercury vapor lamp beamed through a spinning color wheel or separate red, green and blue LED lights. Drawing less power and producing a higher contrast, the LEDs last 20 years under normal usage, compared to four for the expensive mercury lamp. 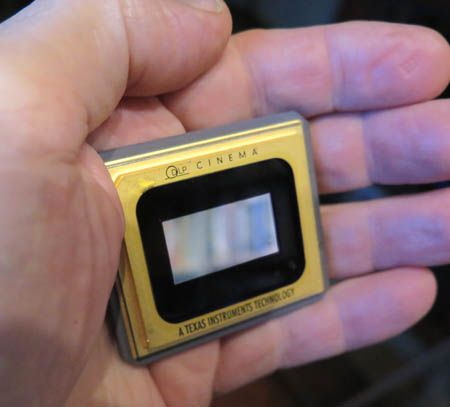 Hard to believe, but more than a million of these light switches, only 16 micrometers square, are fabricated onto one CMOS chip (top). The state of the memory cell (0 or 1) tilts the mirror to reflect or cancel light. Gray scale is achieved by causing the mirrors to oscillate back and forth. (Redrawn from original diagram courtesy of Texas Instruments, Inc.)

The gaps between the mirrors in DMD pixels (left) are smaller than the gaps in an LCD (right), resulting in a sharper display.