The Japanese word for icons (smileys, happy faces, etc.) added to email, texting, chat and tweets. Meaning "picture letter" (e + moji) and pronounced "emma-gee" (Japanese) or "e-mo-gee" (English), users can select from a huge variety of symbols to add emotion to messages. In the past, emojis have not always rendered the same between platforms (see last example below).

Emojis and Emoticons
Emojis emerged on Japanese phones in the late 1990s and were added to U.S. platforms in the 2010 time frame. Prior to emojis, text-only "emoticons" evolved in the U.S. from the colon-dash-parenthesis sequence :-), known as the "smiley face" in the 1980s. See emoticon and Bitmoji.

Unicode Standards
Starting in 2010, the Unicode Consortium governs how emojis are coded to provide keyboard and application uniformity. Every year, the group reviews icon submissions and decides which ones to add. As of 2020, there were more than 2,500 emojis with the smiley face being number one. See Unicode. 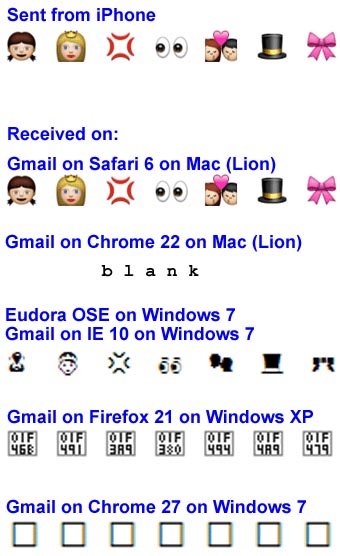 In the past, emojis did not render the same on every platform. Unicode standardization has helped immensely.