A head-worn unit for making telephone calls that contains a microphone and one or two speakers. The difference between a headset and headphones is that the headset has a microphone. Contrast with handset.

Employed in call centers and offices with phone-intensive jobs, headsets allow people to have a comfortable phone conversation while using the computer. Cellphone users employ Bluetooth headsets and wired headsets to keep the phone's radiation away from their brain (see Bluetooth headset and air tube headset).

Wired headsets that plug into a desk phone may have a quick release that lets users walk away without taking the unit off their head. See earphones, headphones and mini-phone connector.

The typical wired headset combines a microphone and speaker in one head-worn unit. Workers can talk and work comfortably on the computer at the same time. 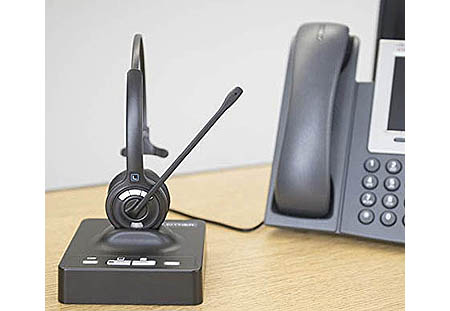 Unlike Bluetooth headsets that transmit only a short distance between cellphone and earpiece, wireless office headsets let people make and answer calls far away from their desks. The range on this Leitner LH270 headset is an amazing 350 feet. (Image courtesy of Amazon.com.)