(2) The part of a desk telephone that is held to the ear and mouth. It contains the speaker (receiver) and microphone (transmitter). Contrast with headset. 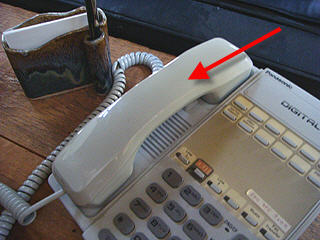 Many people are not familiar with the term "handset." However, when contrasted to a "headset," it makes sense.

The handsets in some early phones contained only the speaker, such as this Blake wall phone at the turn of the 20th century. The microphone was in the base unit. (Image courtesy of Nortel Networks.)