(2) Flash memory is the most economical non-volatile, rewritable storage chip on the market. Comprised of cells that hold a charge without power, flash memory is extremely durable and used in just about every electronic device, including cameras, smartphones, tablets, music players and USB drives. It is also the storage component in solid state drives (SSDs), which are increasingly obsoleting hard drives in computers and servers. Flash memory provides many years of service but eventually wears out (see SSD write cycle). See SSD and charge trap flash.

Erase Before Writing
Evolving from the EEPROM chip, flash was invented by Toshiba in the mid-1980s and named after its ability to erase a block of data "in a flash." However, this block erasing is flash memory's peculiarity. Flash memory cells must be erased before they can be written to.

Cells make up pages, and pages make up blocks, but while pages are written, only blocks can be erased. Fortunately, this all takes place within the SSD, which during idle cycles, erases no-longer-used "dirty" blocks so there are always "clean" blocks to write to.

NOR Flash for Execution
NOR flash is used for program execution similar to RAM. Introduced by Intel in 1988, NOR supports one-byte random access, which means a program's instructions are executed directly from the NOR flash the same way computers execute instructions in RAM. Unlike RAM, NOR flash does not require power to hold its content. See computer and RAM.

NAND Flash for Storage
Toshiba developed the less costly NAND flash in 1989. It has denser cells and faster erasing and writing than NOR. For example, in a digital camera, an internal NOR chip holds the software, but the removable memory cards are composed of NAND chips. In a computer, a NAND flash solid state drive (SSD) functions like a hard drive for both program and data storage (see FTL). For more on flash architecture, see EEPROM, NAND flash and MLC. See charge trap flash, USB drive, memory card, flash BIOS, early memory and non-volatile memory. 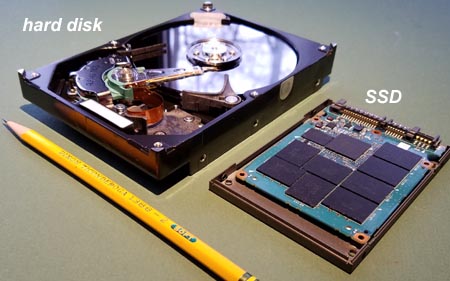 Slowly but surely, flash-based solid state drives (SSDs) are replacing the computer's hard drives for storage. Not only are SSDs faster, there is no read/write head to accidentally scratch a platter's surface (see head crash). See SSD.

The ubiquitous USB drives are not much more than a NAND flash memory chip.

NAND flash memory cards such as this 16GB SD card are used in all modern cameras and camcorders. SD cards are very popular, and they can hold up to 512GB. See SD card and memory card. 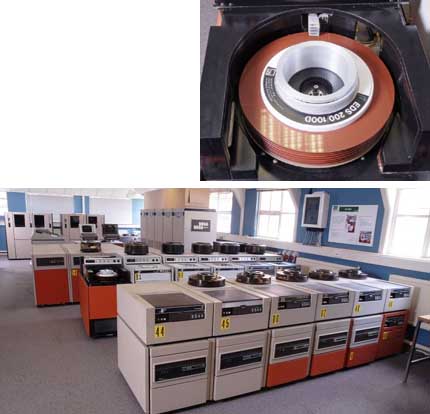 The 16GB SD card in the digital camera example above holds eight times more storage than all the disk drives in this room full of ICL computers. See disk pack. (Images courtesy of The National Museum of Computing, Milton Keynes, U.K., www.tnmoc.org)

Flash evolved from EEPROM cells. They both use a floating gate that holds a charge, which blocks source electrons from reaching the drain (bit is 0). When not charged, the lack of gate electrons allows the source to reach the drain (bit is 1). To erase a block, a high voltage causes all electrons in the floating gates to dissipate into the substrate and turns all bits to 1s. See charge trap flash.