(Synchronous DRAM) The type of dynamic RAM memory chip that has been widely used since the mid-1990s. SDRAM eliminated wait states by dividing the chip into two cell blocks and interleaving data between them. While a bit in one block is accessed, a bit in the other is prepared for access. See dynamic RAM.

DDR (Double Data Rate)
In 2000, DDR SDRAM doubled the data transfer rate by using both the rising and falling edges of the clock cycle. The data rate of each DDR generation is faster than the previous with a six-fold increase from DDR1 to DDR4. In addition, less power is required (see table below). In order to prevent inserting the wrong DDR into the motherboard, DDR memory modules are keyed differently (for details, see memory module).

Channels
Chipsets on the motherboard may support one, two or four memory channels (triple channel has since come and gone). For example, mainstream motherboards support dual channel, which is why memory modules are generally installed in pairs. While data are being read or written to one memory module, the second module is being prepared for reading or writing. High-end motherboards support quad channel. Following are the most popular module speeds for each SDRAM generation. See GDDR. 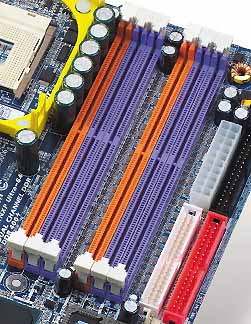 These 12 bits of magnetic core memory from the Whirlwind computer of the early 1950s take up about a quarter of a square inch. Today, that much space holds billions of bits. (Image courtesy of The MITRE Corporation Archives.)