A still camera that records images in digital form. Unlike traditional film cameras that record a light image on film (analog), digital cameras record discrete numbers on a flash memory card. As with all digital devices, there is a fixed, maximum resolution and number of colors that can be represented. Images are transferred to the computer via a USB cable, the memory card or wireless. Earlier digital video cameras used FireWire (see camcorder and FireWire).

Digital Advantages
There are three advantages of digital cameras over their earlier analog counterparts. First, the image is viewable immediately and can be erased. Second, any single picture can be printed without having to develop an entire roll of film. Finally, the memory card "film" is reusable over and over. See film camera.

Chips: The Camera's Film
Digital cameras record color images as intensities of red, green and blue, which are stored as variable (analog) charges on a CCD or CMOS image sensor chip. The charges are converted to digital and stored in flash memory chips on a memory card such as CompactFlash, SD or Memory Stick. Some earlier digital still cameras used optical discs for storage instead of flash memory.

The number of pixels in the sensor chip determines the picture's resolution, but the analog-to-digital conversion establishes the number of colors. See megapixel, A/D converter and color depth.

Behind the lens, a CCD or CMOS image sensor chip picks up the image as variable (analog) charges that are turned into digital by an analog-to-digital circuit (see A/D converter). A DSP chip adjusts contrast and detail and compresses the digital data for storage.

A classic now, in 1996, Kodak's DC50 was one of the first digital cameras. Holding 24 images in internal memory, it used CompactFlash for more storage. Actually, Kodak invented the first digital camera in 1975, weighing in at eight pounds and storing 30 images on a digital tape cassette. (Image courtesy of SanDisk Corporation, www.sandisk.com) 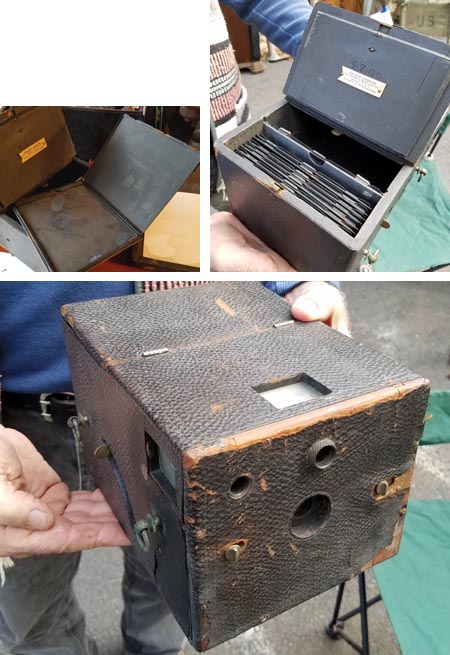 Film chemicals on 4x5" glass plates were placed in light-tight holders (upper left) in a darkroom and stored inside the camera (upper right). To take a picture, an unexposed holder was moved to the front. After the lid was closed, a lever opened the holder exposing it to the lens. Camera and 12 holders sold for USD $12. (Images courtesy of Bob Schenewolf.)