(CRYPTOgraphic CURRENCY) A digital currency that resides in a decentralized public ledger known as the "blockchain." Cryptocurrencies are not maintained or governed by any bank, financial institution or nation. Each one is a global entity, and in 2009, Bitcoin was the first. Since then, well more than a thousand others have been introduced with names such as Litecoin, Namecoin, Peercoin, Mastercoin, BlackCoin and Dogecoin. However, many are nothing more than scams that take advantage of the latest craze. See Bitcoin, Ethereum, Litecoin, Ripple, Dogecoin, Libra and blockchain.

What's Cryptic About It?
The transaction that sends money from one party to another is digitally signed via public key cryptography. Thus, the identity of the parties is kept secret, much like paying for merchandise with cash in the physical world. However, the transaction itself is a public record; for example, "party x sent 10 bitcoins to party y on June 20, 2015." See cryptocurrency tumbler, digital signature and public key cryptography.

Based on Demand
Except for Sharia-conforming OneGram, which is backed by gold, and "stablecoins," which are backed by fiat currencies, the value of many cryptocurrencies is based on a fluctuating market with the currency exchanges publishing bid and ask prices per coin like a share of stock. Once worth a few cents, a single bitcoin jumped to thousands of dollars. Cryptocurrency traders hope to make fortunes with this phenomenon, which gathered immense steam in the 2010s. See stablecoin. 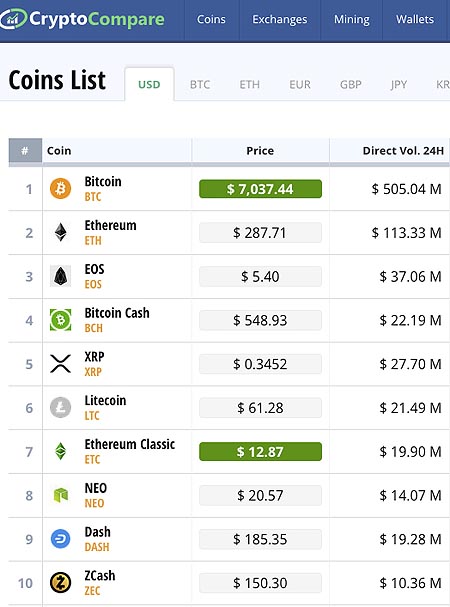 For the latest cryptocurrency updates, go to www.cryptocompare.com. As of 2020, there are nearly 2,000 coins in the list.