(CRYPTOcurrency wallet) The electronic interface to a user's crypto. A cryptocurrency wallet is a Web-based account or software in a mobile device that allows people to buy, sell and trade cryptocurrency coins and tokens. Although Bitcoin and Ethereum are the most widely known cryptos, there are countless others, and any given wallet supports several.

Wallets Are Like Debit Cards
A wallet does not hold the coins or tokens. It maintains the private cryptographic keys to access the crypto that resides on the blockchain. Unlike a traditional wallet holding cash, a crypto wallet functions more like a debit card that has access to the money in a person's checking account.

If a wallet is somehow deleted, and the private keys were never saved, asset ownership is gone forever. Millions of dollars have been lost because people did not back up their keys. Wallets can also be in hardware, which is safer than software (see below).

The Alternative - Custodial Wallets
In contrast to self-managed wallet software, users can open an account with a cryptocurrency exchange such as Coinbase or Binance and buy, sell and trade crypto similar to the way people use Fidelity, Vanguard and other brokers to buy and sell stocks and bonds. The exchange maintains all the keys to the crypto. See crypto exchange.

Non-Custodial - Hierarchical Deterministic (HD)
Installed in the user's computer, tablet or phone, most crypto wallets today are HD wallets. They derive the private keys from a randomly generated "seed" created at startup, which is 12 to 24 everyday words (see image below). The seed words must be written down and kept safe. If the wallet were ever destroyed, the seed becomes the "recovery phrase" to regenerate all the keys.

The HD wallet creates the private keys in a hierarchical tree, and the different branches can be used to organize payments for accounting purposes. The private keys are used to generate the public addresses that are visible to everyone (see block explorer).

Non-Custodial - Nondeterministic
Using random numbers and known as "just a bunch of keys" (JBOK), this earlier approach generated a private key for each transaction, and each key had to be backed up. See Bitcoin wallet, crypto wallet address and cryptocurrency. 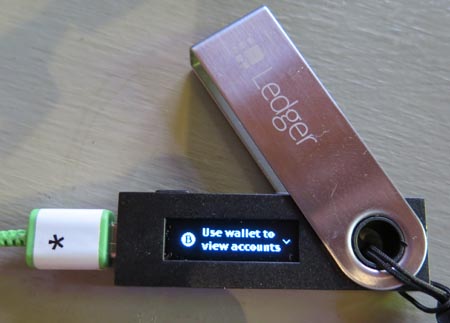 Nano hardware wallets support Bitcoin, Ethereum as well as other cryptos and cannot be hacked when offline. When first used, 24 everyday words are generated as the seed (two examples at top) to create the private keys. If the device is ever lost or destroyed, the words are used to recover the keys. See cold wallet.

This paper wallet was generated from a Bitcoin ATM, and its QR codes can be scanned to import the coins into a digital wallet app or make another ATM transaction. The private key is used to send coins and the public key is used to receive them. See Bitcoin ATM.