A popular Ethereum-based game about breeding cats from Dapper Labs in Canada. Introduced in 2017, players buy cats with ether, and they become NFTs (non-fungible tokens) that can be bred and sold. Each cat has a 256-bit genome with attributes (catributes), which makes their offspring unique. With one million cats bred within a year, CryptoKitties was nearly a quarter of Ethereum's traffic.

The first time a blockchain-based game became hugely successful, an entire generation of CryptoKitties was sold by auction over the course of one year. Ever since, new cats are created by breeding; however, there will never be more than four billion. Owners can sell the offspring or get paid for breeding with another CryptoKitty. The MetaMask wallet is used for transactions. See MetaMask, Ethereum, crypto wallet and NFT. 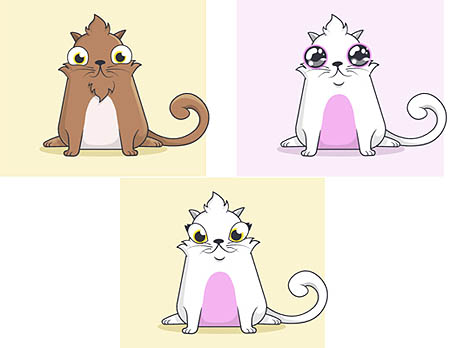 These cats are an example of breeding from the CryptoKitties website. The two (top) were bred to create the one below. (Image courtesy of Dapper Labs.)