An internal timing device. Using a quartz crystal, the clock in a computer breathes life into the microprocessor by feeding it a constant flow of pulses. For example, a 200 MHz CPU receives 200 million pulses per second from the clock. A 2 GHz CPU receives two billion pulses per second. Similarly, in a communications device, a clock is used to set the transmission speed and may also be used to synchronize the pulses between sender and receiver.

Other Clocks
A "real-time clock," also called the "system clock," keeps track of the time of day and makes this data available to the software. A "timesharing clock" interrupts the CPU at regular intervals and allows the operating system to divide its time between active users and/or applications. See Hertz, per clock, clockless computing and how to spoof your techie friends.

The quartz crystal generates continuous waves, which are converted into digital pulses. 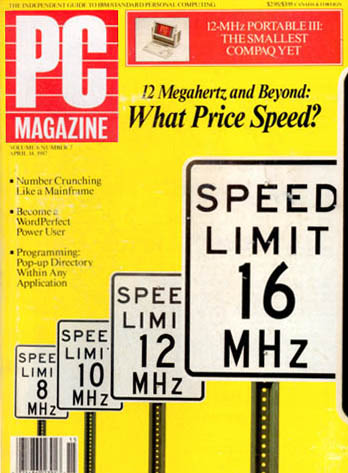 The April 1987 issue of PC Magazine pondered the price tag of faster computers. Of course we all found out how much they cost as computers reached two gigahertz and beyond. State-of-the-art CPUs have clocks in the 5 and 6 GHz range. (Image courtesy of PCMag.com.)