A GPS navigation unit that is built into the dashboard of a vehicle. Aftermarket units that replace the factory head unit may include AM/FM/HD and satellite radio as well as hands-free cellular. Earlier units included a CD player.

In the mid-1990s, car navigation systems emerged, and by 2000, in-dash systems became a luxury car option. Subsequently, aftermarket in-dash navs became available, and factory-installed units migrated to nearly every vehicle as an option.

Where To?
Not only can the system direct drivers to a specific street address, but it can guide them to the nearest gas station, hotel, restaurant or other point of interest (POI). Top-end units can hold millions of POIs. Similar to the Waze mobile app, in-dash navigation systems may receive real-time traffic reports.

Voice In and Out
Modern navigation units support voice recognition for setting the route and controlling the unit, allowing drivers to concentrate on the road. Navigation systems also offer voice output for turn-by-turn directions. While older units verbalize only the distance to the next turn, newer units also pronounce the street names and exit numbers.

Speed Connection Advantage
In-dash navigation systems can monitor the speed of the vehicle very accurately by wiring the unit to the automobile's internal speed signal. However, some units rely solely on the GPS and auxiliary correction, such as WAAS, to pinpoint their location. Combined with a gyroscope, the unit can also track the vehicle in a tunnel, on the lower level of a bridge or in a big city where line of sight to three satellites is not always possible. See Android Automotive, portable GPS, GPS and WAAS. 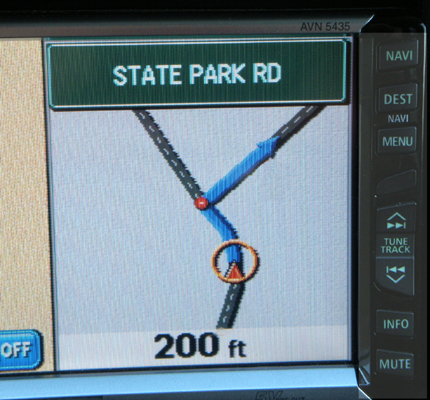 All navs, in-dash and portable, provide turn-by-turn directions both verbally and visually. This Eclipse aftermarket unit switches to close-up view within a quarter mile of a turn and then counts down in feet. See reality view.

In-dash navigation systems use combined head units that include AM, FM, satellite radio, CD player, inputs for external players, hands-free telephone via Bluetooth and possibly a DVD player. They are also fully integrated into the car's steering wheel controls.

Compare the Eclipse nav (top) circa 2006 with the Garmin unit (below) a decade later. The Garmin's large text makes it much easier to read and also provides more information.