An audiophile is a person who loves listening to high-quality sound from a stereo or home theater. Audiophile-grade recordings and equipment are designed to reproduce music without distortion or coloration. When hi-fi took off in the 1950s, the first audiophiles were also "stereophiles." See high-resolution audio, DSD, stereophile and phonophile.

Quite often, audiophiles are as passionate about the equipment they use as the music they listen to, and the gear can be very costly. An entry-level system typically costs around $10,000, while top-end systems reach the stratosphere (see images below). Contrast with videophile. See imaging, preamp, Laser Turntable, Burwen Bobcat and audiophile DAC.

Sound Is Not Easily Remembered
Only people with exceptional auditory capability can listen to sound systems in different stores and compare sound quality. The only way for most people to test audio fidelity is to switch back and forth between two systems in the same store playing the same music. Also, what sounds good in the showroom will sound different at home. 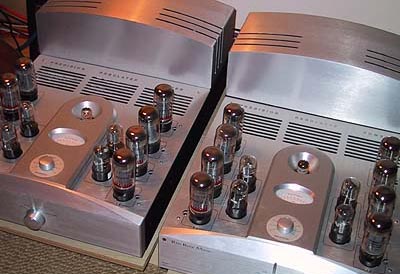 Many audiophiles swear that only tubes faithfully reproduce music. These Model One amplifiers were designed by renowned audio engineer Mark Levinson and weigh more than 100 pounds each. See vacuum tube.

Hosted at CES in Las Vegas, vendors showcase the most exotic audio equipment in separate hotel suites. Held in the Venetian Hotel in 2010, there were numerous $100,000+ stereos. In fact, there were three $500,000 systems, a turntable for $96,000 (not including tonearm and cartridge) and cables for $1,000 per foot. See CES.