The aspect ratio states the comparison of width to height and is commonly used to describe the shape of a TV or computer screen. For example, the aspect ratio of an earlier standard-definition (SD) screen was 4:3, which is a relatively square rectangle. The 4:3 means "4 to 3," or four units wide to three units high. Today's TVs and monitors typically have a 16:9 ratio, which is a wide rectangle that is still not as wide as most movie theater (cinema) screens.

Another way of expressing the 4:3 and 16:9 ratios is 1.33:1 and 1.78:1; however, these latter designations are used mostly for cinema formats, rather than TV (see illustration below). See letterbox, screen resolution, HDTV display modes and anamorphic DVD. 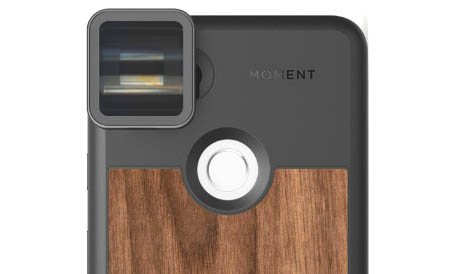 Moment created an anamorphic lens for an iPhone with a 2.4:1 aspect ratio in order to simulate a Cinemascope video on a smartphone. (Image courtesy of Moment, Inc., www.shopmoment.com)

Displaying a wide screen 16:9 image (right) on a standard-definition 4:3 TV (left) creates black bars on the top and bottom. Movies that retain their original, extra-wide cinema formats will create a letterbox even on today's wide screen TVs. (Image courtesy of Intergraph Computer Systems.)