The latest version of Windows superseding Windows 10. Available as a free upgrade to Windows 10 in late 2021, Windows 11 has a new Start menu with icons centered on screen. Snap Layouts allow several application windows on screen to be treated as a group and maximized/minimized at the same time. Virtual desktops for different work activities are more easily created.

Microsoft Teams and Android Compatibility
Microsoft Teams is integrated and widgets can be launched from the taskbar. A major enhancement is Android app compatibility. By installing the Windows Subsystem for Android, users can run Android apps on their Windows desktops.

Enhanced Gaming
Gaming enhancements such as Auto HDR, which boosts standard dynamic range (SDR) to the more intense colors of high dynamic range (HDR), are built into Windows 11. A dedicated gaming tab is also included in the settings. See Windows 10 and Windows.

Tablet and Voice Enhancements
For tablet screens, there is more space between icons on the Taskbar, and noise and vibration (haptics) were added to the digital pen. Voice commands were also introduced. 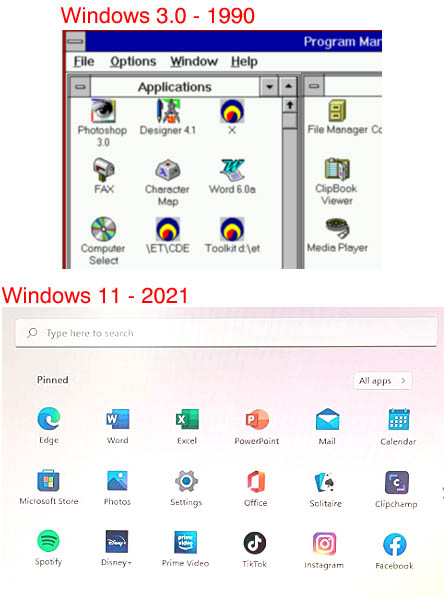 The Windows 11 Start menu is moved to the center of the screen, reminiscent of Windows 3.0 thirty years prior (see Program Manager). However, users can move the Start menu back to its Windows 10 location. See Windows 3.0.