A peripheral interface from Intel introduced in 2011. First used on a MacBook Pro laptop, Thunderbolt provides simultaneous transfer of DisplayPort graphics for the monitor and PCI Express data for storage and other devices.

Up to six peripherals can be connected in a daisy chain, providing an expansive external interface over one port. However, computers generally have several Thunderbolt ports. See DisplayPort, PCI Express and USB.

Thunderbolt 4 (TB 4)
In 2020, TB 4 launched with the same speed as TB 3, but USB was upgraded from 3.1 to 4. Following are the Thunderbolt generations, and each is backward compatible with the previous one. See Thunderbolt Display and Thunderbolt Bridge.

Thunderbolt 1 and 2 use the Mini DisplayPort plug and socket; however, Thunderbolt 3 switched to USB-C (see USB Type C). 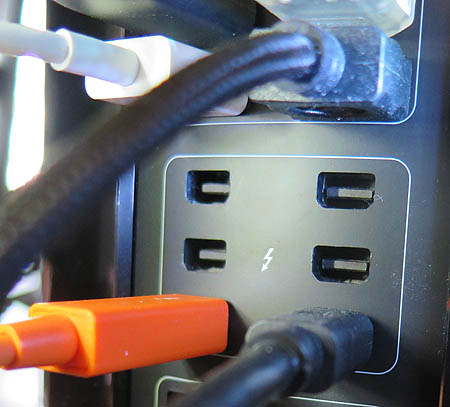 Two of the six Thunderbolt ports are used on this 2nd-generation Mac Pro. The black cable delivers DisplayPort to the monitor, and the orange cable transfers data between an external drive over PCI Express. See Mac Pro.