(1) Written as two words, a "display port" is a generic description of a socket that is cabled to a monitor. See VGA, DVI and HDMI.

DisplayPort is also used internally in laptops and TVs. An Embedded DisplayPort (eDP) connects the laptop motherboard to the LCD screen, and the TV counterpart is the Internal DisplayPort (IDP).

Audio
DisplayPort supports up to eight channels of 16-bit or 24-bit PCM audio with sampling from 32 to 196 kHz. Monitors with built-in speakers connected to the computer via DisplayPort need no additional cable for audio. See PCM.

Packets Are More Efficient
Unlike other monitor interfaces, DisplayPort transmits packets, each of which contains its own clock synchronization. The packet architecture enables DisplayPort to be enhanced more easily than an interface where each physical pin is dedicated to some purpose. In addition, DisplayPort allows for slimmer screens, because it eliminates circuits that would otherwise be in the monitor.

Multiple Channels
DisplayPort (DP) supports multiple independent data streams and can drive up to six monitors daisy chained together (see MST). Also included is an auxiliary channel for device control and management. In Version 1.2, the auxiliary channel increased from 1 to 720 Mbps to enable video transfer along with USB 2.0 data. 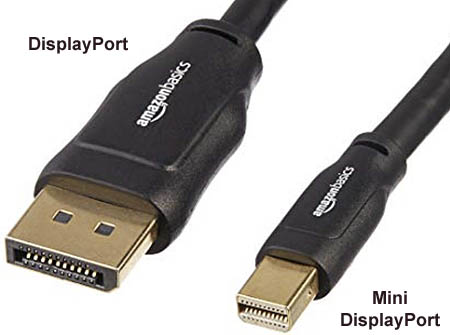