The electric vehicle company that ignited the EV revolution in the 21st century. Founded in 2003 by Martin Eberhard and Marc Tarpenning, Elon Musk, who contributed major funding and vision, has been CEO since 2008. With its own showrooms and online ordering, Tesla sells direct to customers. As of 2021, there are no third-party Tesla dealerships. See electric vehicle.

Nikola Tesla - AC and Radio
The company was named after electrical engineer Nikola Tesla (1856-1943), who made major contributions to the design of AC current. In addition, Tesla is credited with inventing radio after the U.S. Supreme Court awarded all of Guglielmo Marconi's radio patents to Tesla six months after Tesla's death.

From the Ground Up
Rather than retrofit an existing car body for the huge battery necessary to power an EV, Tesla designed its vehicles from scratch. It is also ahead of most other car companies in making its own batteries and charging stations.

Greater Range and Free Charging
In 2009, the Tesla Roadster was first with a 200-mile range. Since then, models reached the 350+ range, making an EV more viable for people who travel a lot.

In 2014, Tesla had sufficient charging stations in the U.S. to enable owners to drive from Los Angeles to New York. Initially free, the company dropped the free service in 2017 but later resurrected it for high-end S and X models. See SAV and SpaceX. 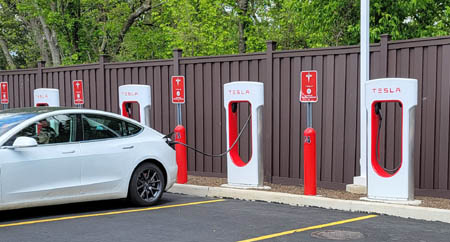 Whereas other automobile manufacturers have concentrated on developing their EV technology, Tesla has invested in the entire ecosystem by installing chargers all around the U.S. These units in Bucks County, Pennsylvania are at a Wawa convenience store and gas station.