A family of compression utilities for DOS, Windows, OS/2, OpenVMS and Unix from PKWARE Inc., Milwaukee, WI (www.pkware.com). In 1986, Phil Katz (the PK in PKWARE) developed the ZIP standard that is widely used throughout the world. Originally developed as DOS command line programs, third parties developed graphics-based products that supported the format. Later, PKWARE introduced a Windows version. PKARC and PKXARC were previous compression programs that are no longer supported.

Security
In 2001, the ZIP file format was extended to include authentication and encryption features to make ZIP archives secure. Soon after, the company introduced its server-based SecureZIP product family to address the industry-need for not only compression but the secure transfer of data. Another major product was added in 2006; PartnerLink addresses the need to exchange data securely with external business partners.

A Short Career
In 2000, founder Phil Katz, a computer genius who battled many personal problems, died at the young age of 37. He left behind a multimillion-dollar company and one of the most influential pieces of software ever invented for mainstream PC users. See PKZIP abc's, PKZIP cross platform and SecureZIP. 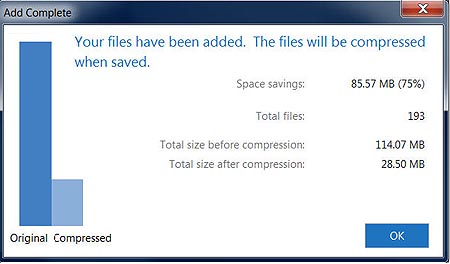 The WinZip utility is widely used to compress files using PKZIP. Zipped files are lossless and are restored to their original format bit for bit when decompressed. This example highlights the file size difference. See lossless compression.