Hardware and software services from a provider on the Internet (the "cloud"). Cloud providers replace in-house operations and are invaluable for companies, no matter their size or type of applications. Cloud computers are servers that can be configured to handle tiny or huge amounts of traffic and expand or contract as needed. The cloud eliminates the security, maintenance, network and environmental issues with home grown datacenters. For the in-house version of cloud computing, see intranet.

Is Every Internet Function Cloud Computing?
Not exactly. Websites, email, automatic updates, backup, photo storage, streaming, virtually anything over the Internet might be considered cloud computing because a cloud is a network, and the Internet is the biggest network there is. However, technically, cloud computing comprises the following two services, which replace software installed in the user's computer with online access. See cloud.

Software Service
Cloud computing started with software as a service (SaaS), which offers online business applications by subscription. Everything is managed by the cloud provider and accessed online via the Web browser, which is generally the only application required in the user's machine.

Hardware Service
Secondly, tech giants such as Amazon, Google and Microsoft, with years of experience running huge datacenters, began to rent time on their servers, allowing companies a viable alternative to housing their own. Amazon is the largest. See Amazon Web Services, Google Cloud Platform and Microsoft Azure.

Cloud Computing Features
(Self Service) The customer sets up an account online and manages the process from start to finish.

(Scalability) Both users and servers can be easily added and deleted.

Software as a Service (SaaS)
After the Web became popular in the late 1990s, for the first time, SaaS providers offered business applications to the end user online, eliminating routine and error-prone in-house software maintenance. Salesforce.com was notably one of the first. Customers pay by the number of users. For the IT department, this was a paradigm shift. However, every solution generates other problems. When data are stored outside the company, there are security and privacy issues.

Infrastructure as a Service (IaaS)
Also called "cloud hosting" and "utility computing," IaaS provides the bare server hardware, or the hardware plus a virtual machine (VM), which is one partition in a server shared by many customers. IaaS customers upload all the software, from OS to applications. See virtual machine and software stack.

Platform as a Service (PaaS)
PaaS includes the server hardware, operating system and database, plus all necessary system software to run applications (the "stack"). With IaaS and PaaS, customers pay by some combination of server size, speed, storage capacity and network time (uploads and downloads). See stack, runtime engine and system software.

Function as a Service (FaaS)
FaaS includes the server hardware at the most granular level. FaaS customers pay only for the time it takes to execute specific tasks (see serverless computing).

The Virtualization Foundation
Cloud datacenters employ server virtualization, which, among other benefits, allows workloads to be added and removed as self-contained modules. IaaS and PaaS customers require technical skills to configure these functions. It is safe to say that without virtualization having become mainstream in the IT world, cloud computing would not have emerged. See server virtualization and virtual machine.

Private and Hybrid Clouds
Enterprises can create private clouds in their datacenters that employ the same cloud computing infrastructure used on the Internet. The private cloud provides the same flexibility and self-service capabilities, but with control of privacy.

A hybrid cloud is both private and public. Companies may decide to keep certain applications in-house while deploying others to the cloud. In addition, if the private cloud is overloaded, applications can be activated temporarily on a public cloud, such as expanding an e-commerce website during the holidays. 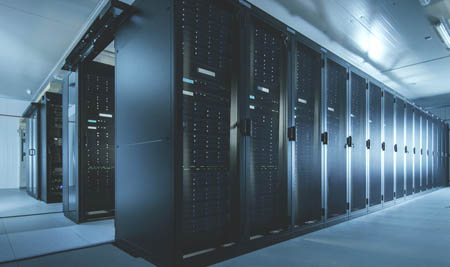 A cloud datacenter is mostly rows of rack-mounted servers that are in an unlit room until an engineer needs to perform maintenance. See rack mounted. 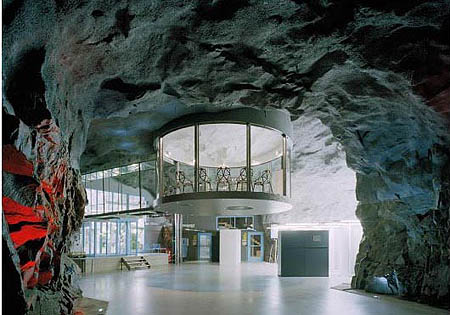 Housed in the former Pionen civil defense center 100 feet below Vita Berg Park in Stockholm, Bahnhof AB offers Internet access and a variety of cloud computing services in one of the world's most unique and secure datacenters. (Image courtesy of Bahnhof, AB, www.bahnhof.net)