A family of Android smartphones from Samsung introduced in 2010. The following year, Galaxy S was named European Smartphone of the Year and soon became the most popular Android phone on the market. In 2012, Samsung featured a 4.8" screen on its S III and accelerated the trend for larger displays (see phablet). See Galaxy Note, Google Nexus, Galaxy A, Galaxy C and Galaxy X.

Galaxy S9 - (April 2018)
The latest Galaxy S line. The S9 and S9+ are very similar to the S8 and S8+; however, the S9 has a new camera with increased brightness and a more efficient processor for better battery life. The fingerprint sensor is easier to reach.

Galaxy S8 - (April 2017)
Both the 5.8" S8 and 6.2" S8+ employ slightly curved screens around the sides like the S7 Edge, and both models include the Edge rotating toolbars. The top model S8+ is noticeably taller than the S7 Edge, although the widths are the same.

Type C USB replaced the Micro USB connector, and Samsung's Bixby virtual assistant was added to answer questions, command the device and analyze images (see USB Type C and Bixby). To allow for thinner top and bottom bezels, the physical home button was dropped. As a result, the S8's fingerprint reader was moved to the back of the phone. 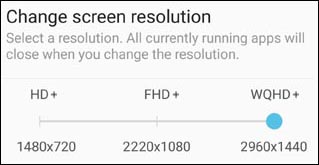 In current Galaxy models, the screen can be switched to three resolutions. The lower resolutions save battery.


Galaxy S6 (April 2015)
The S6 has a slightly thinner, more refined case but the same 5.1" size as the S5. Adding Qi wireless charging to the line, two surprises were the elimination of the replaceable battery and SD card slot for extra storage (the SD returned on the S7). The S6 added fast battery charging and a minimum of 32GB of storage. The S6 Edge comes with slightly curved screens at both sides. See Galaxy S6 Edge.

Galaxy S5 (April 2014)
With a 5.1" screen, the S5 featured many enhancements such as a built-in heart rate sensor and fingerprint reader. The camera took 16-megapixel pictures with advanced modes; for example, the depth of field could be changed after taking the shot. The S5 was waterproof for a short period in one meter of water. For Samsung smartwatch users, the S5 could be a baby monitor that sends signals to the watch. See Samsung Gear.

Galaxy S4 (April 2013)
Slightly thinner than the S III, the S4 had a 5" screen and 13-megapixel rear camera. A variety of camera features were added, including automatic album creation and simultaneous front and back recording. The S4 included a higher-capacity battery, an infrared (IR) blaster for home theater remote control and gesture recognition. For example, scrolling and zooming in some apps can be performed by hand motions, and eye tracking will pause a video if the user moves away from the screen.