Samsung's foldable smartphone. Introduced in the fall of 2019 and initially available only from AT&T, the Galaxy Fold uses a flexible OLED screen. When closed, the Fold is a thick smartphone but opens up to a small tablet, enabling apps to be viewed side-by-side. It includes three main cameras from 12 to 16MP and up to 1TB of internal storage. There is no microSD card slot. As expensive as a top-end laptop computer, Folds have ranged from $1800 to $2000.

Galaxy Z Fold4
In 2022, the latest Fold weighs a little over nine ounces and features a much larger phone screen, flatter hinge and improvements to the on-screen keyboard. As in a desktop computer, a taskbar on the bottom of the unfolded 7.6" screen makes switching apps faster. The fingerprint reader is on the side.

In 2021, the Z Fold3 is similar to the Z Fold2; however, the Fold3 supports the Samsung S Pen and includes Qualcomm's newer chip (Snapdragon 888 vs. 865). Both models are 5G capable. See Galaxy Z Flip, iPhone Fold, FOLED, Galaxy S, Galaxy A and Galaxy C. 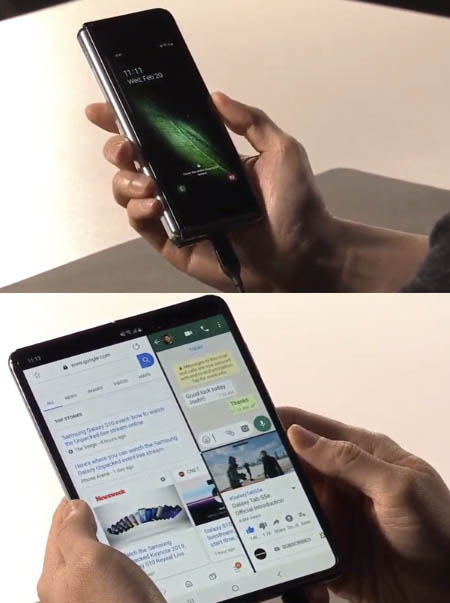 When closed, the Fold is a rather thick smartphone but when opened, it offers the convenience of a 7" tablet. (Images courtesy of PCMag.com.)