The floppy disk version of "The Computer Glossary," the origin of this encyclopedia. Long gone with the demise of floppies, Electronic Computer Glossary came out first for DOS in 1990 and then Windows in 1991. For a brief time, a Mac HyperCard stack was also available. In 1996, the CD-ROM version became "Computer Desktop Encyclopedia" to coincide with the new book title created by Amacom, which was then the publishing division of the American Management Association (AMA). Today, the content is entirely online.

Freedman Taught Himself C
When Alan Freedman, author of this encyclopedia, wanted to migrate the printed content to the PC, none of the programming languages he knew could accomplish that task. So, at the ripe old age of 48, Freedman taught himself C and wrote the program. A friend new to Windows programming wrote the first Windows version, which was greatly enhanced later on by a very experienced programmer. See About this encyclopedia and ComputerLanguage.com. 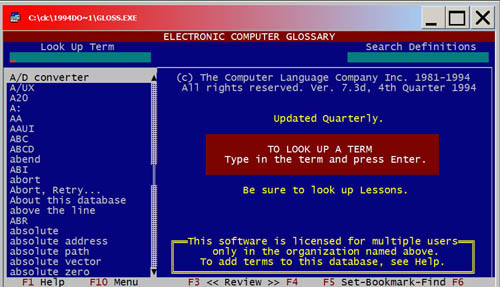