A popular Linux distribution that is noted for its ease of installation and use. Based on Debian Linux and introduced in 2004, Ubuntu is sponsored by Canonical Ltd., (www.canonical.com). Packaged with a variety of open source applications, including Firefox and LibreOffice, Ubuntu also comes pre-installed on laptops, desktops and servers. For example, System76 (www.system76.com) has been selling Ubuntu machines since 2005, and Dell introduced Ubuntu laptops in 2007.

Ubuntu can also be run from a CD, which enables the OS and applications to be tested in a particular computer before being installed (see LiveCD).

Kubuntu, Edubuntu and Xubuntu Variations
Ubuntu comes with the GNOME desktop, but "Kubuntu" is Ubuntu with the KDE desktop. "Edubuntu" includes extra applications for setting up a classroom, and "Xubuntu" is a more efficient version for low-powered machines. Xubuntu uses the Xfce desktop rather than GNOME or KDE.

From the Zulu and Xhosa Philosophy
The name Ubuntu comes from the African Zulu and Xhosa cultures, which espouse the concept that we derive our individuality from all people: "We are what we are because of everyone else." Nelson Mandela's father was a Xhosa chief. For more information, visit www.ubuntu.com. See Linux, Debian and Linspire. 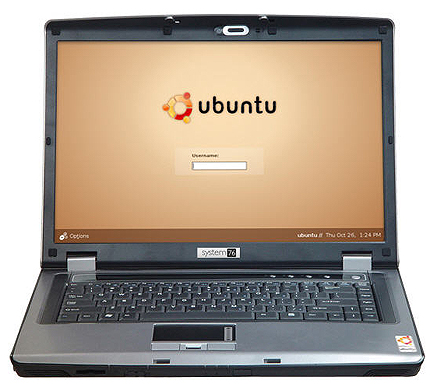 In 2005, System76 was the first hardware vendor to offer packaged Ubuntu laptops, desktops and servers. This laptop came with a variety of applications that people use all the time. (Image courtesy of System76, www.system76.com)