An Amazon Echo device for the car. Introduced by invitation-only at the end of 2018 (for 2019 delivery), Echo Auto connects to the Alexa virtual assistant via the app in the driver's smartphone. Using voice commands, Echo Auto functions like traditional Echo devices but plays through the car's speakers. It also interacts with the phone's navigation systems such as Google Maps, Apple Maps and Waze. For all the in-home Echo devices, see Amazon Echo.

Alexa in Your Car
Starting in 2017, Alexa functionality has been built into several vehicles. Depending on make and model, Alexa can perform various functions beyond in-home Echo devices, such as starting the car and reporting the gas tank level. In some vehicles, Alexa can operate smart home devices such as lights and garage doors. 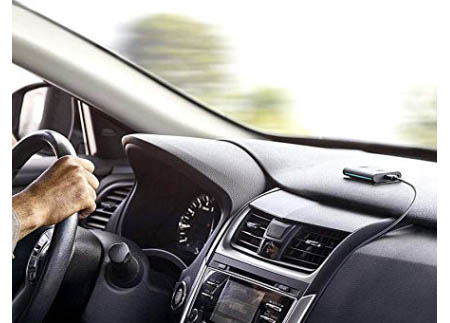 Echo Auto rests on its dash mount and connects to the user's phone via Bluetooth or an auxiliary input. (Image courtesy of Amazon.com.)