A cryptocurrency that was named after the Doge Internet meme of a Japanese Shiba Inu dog. Launched as a joke in 2013, six years later, one Dogecoin was valued at less than one cent. In April 2021, after being listed on Coinbase, Dogecoin topped 40 cents only to tumble thereafter. Pronounced "doszh-coin," Dogecoins are constantly mined and as of 2022, more than 100 billion coins are in existence. DOGE is the native crypto symbol.

Tesla Merchandise Via Dogecoin
In January 2022, Tesla allowed Dogecoin to be used to purchase select merchandise such as coffee mugs and Tesla-branded belt buckles from its online accessory site. The company had previously enabled Tesla vehicles to be bought with Bitcoin but cancelled the option after only a few weeks. See cryptocurrency and meme coin. 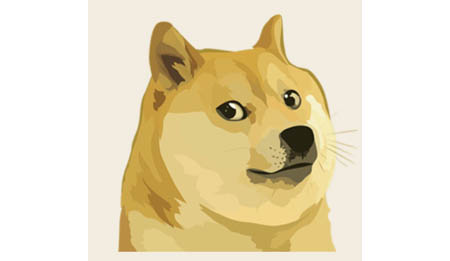 The coin's logo is the face of the Shiba Inu. According to the Dogecoin website, the open source peer-to-peer digital currency is favored by Shiba Inus worldwide. See Shiba Inu. (Image courtesy of The Dogecoin Project 2021, www.dogecoin.com)