(2) A part of the "deep Web" that is only accessible via browsers such as Tor, which stands for "The Onion Router." The Dark Web hosts websites that sell illegal merchandise including drugs, weapons, stolen financial data, malware and cybercrime services. There are consultants on the Dark Web who literally advertise "I will wreck someone's life for x amount of $$$."

Although merchandise is advertised in dollars or Euros, the equivalent amount is paid in Bitcoin, Monero or some other cryptocurrency, which hides the buyer's identity. Nevertheless, whenever physical merchandise is shipped, the seller has a record of the recipient's street address, and that data can also be hacked or confiscated by authorities. Thus, purchases on the Dark Web may never truly be anonymous. See Tor, Bitcoin and Monero. 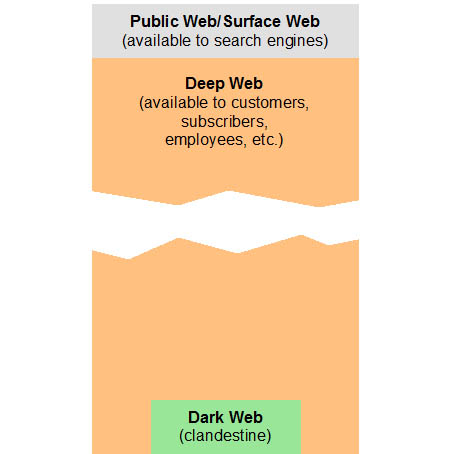