A low-cost PC from Intel introduced in 2006 for the education markets of developing countries. Part of Intel's World Ahead program, the Classmate was competition for the non-profit One Laptop Per Child (OLPC) initiative of Nicholas Negroponte (see OLPC). However, in 2007, Intel joined the OLPC board to collaborate on future products. 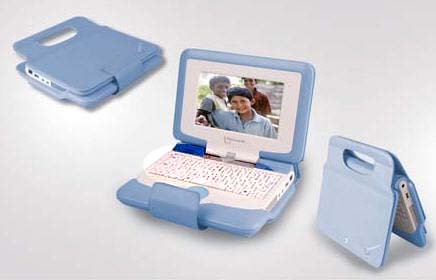 With a 7" screen, 256MB of RAM, 2GB of flash and a 900 MHz Celeron CPU, the first Classmate ran Windows XP, a beginner's Mandriva Linux and the Linux-based Metasys Classmate educational OS. It has since been superseded by advanced models, including a Windows 8.1 laptop and Android tablet. (Image courtesy of Intel Corporation.)