Although Bitcoin and Ethereum both use a decentralized blockchain architecture which has no middleman, Bitcoin is strictly a cryptocurrency. All transactions pertain to buying and selling bitcoins (BTC).

Ether (ETH) is Ethereum's native cryptocurrency, and it can be bought and sold just like Bitcoin. However, the Ethereum blockchain is a general-purpose platform that hosts programs known as "smart contracts," which are used to create other cryptocurrencies, NFTs and more. See smart contract and NFT.

Both blockchains are having a major impact on the world, but for different reasons. Bitcoin (BTC) is entirely unregulated cash. Ether (ETH) is also unregulated cash that can be bought and sold for speculation, but because of Ethereum's smart contract platform, a fee is paid in ether for every transaction that executes a function in the contract. As more smart contracts are deployed on Ethereum for different purposes, more ether is paid to activate and execute them. This smart contract programmability is why Ethereum is called "the world computer," as dramatic as that sounds. See blockchain oracle.

Cap and Speed
The number of bitcoins will eventually top out at 21 million in the year 2140. Ethereum has only an annual cap of 18 million ether. A new block of bitcoins takes up to 10 minutes to become part of the blockchain. Ethereum blocks take only seconds. See Bitcoin, Ethereum, blockchain and crypto glossary. 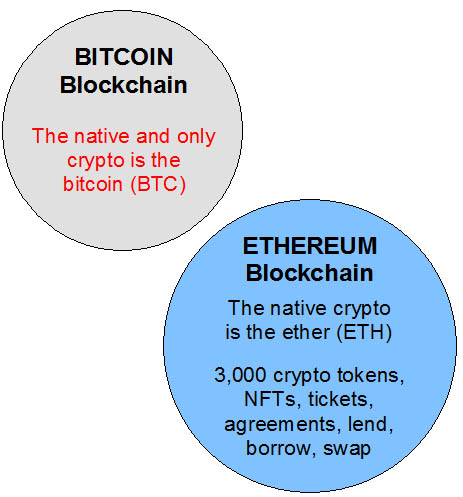 Although the bitcoin is the only cryptocurrency on the Bitcoin network, there is no end to the tokens on Ethereum. See Ethereum token.