The first personal computer to include integrated software and use a graphical interface. Introduced in 1983 by Apple and modeled after the Xerox Star, the Lisa was ahead of its time but never caught on due to its $10,000 price and slow speed. Named after Steve Jobs' daughter, the Lisa gave way to the Macintosh, which was developed by a separate group within Apple. In fact, the final production units of the Lisa were modified into a somewhat-compatible version of the Mac. See Macintosh. 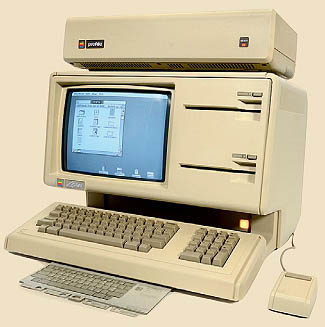 Although very slow, users were entranced by its graphical functions such as cut, copy and paste between applications. (Image courtesy of AUCTION TEAM BREKER, Cologne, Germany, (c) 2013, www.breker.com)