(Advanced Television Systems Committee) The international digital television (DTV) standard in the U.S., Canada, Mexico and South Korea as well as other smaller countries. Broadcast over the air (terrestrial) or via satellite and cable, ATSC transmits in a 6 MHz channel and uses MPEG-2 video compression and Dolby Digital audio compression. ATSC was adopted by the FCC in 1996. For resolution details, see DTV.

ATSC 2.0
In 2015, Version 2.0 of the ATSC standard added support for advertisements, video-on-demand, interactive features and mobile devices that act as a second screen. ATSC 2.0 never materialized, but some of its features were adopted in ATSC 3.0.

ATSC 3.0 - NextGen TV
With rollouts beginning in 2020, the IP-based Version 3.0 provides increased efficiency and performance as well as support for 4K and HDR video. Viewers can rewind a program to the beginning even if it already started, and ATSC 3.0 provides custom home screens, zooming and alerts for favorite shows. Object-based audio (Dolby Atmos and DTS:X) are supported if the TV tuner is Dolby AC-4 capable. Targeted emergency alerts and GPS navigation updates are also included. See 4K TV, HDR, Dolby Atmos and DTS. 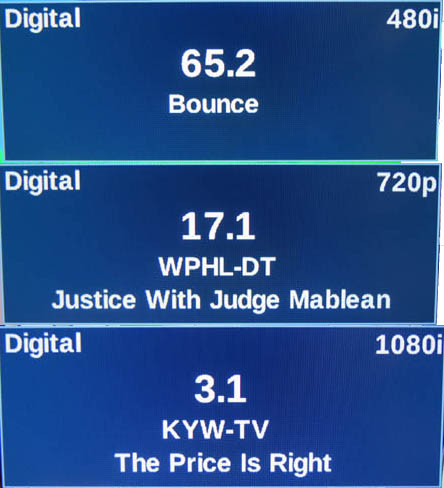 Over-the-air digital TV supports 480, 720 and 1080 lines in both interlaced (i) and progressive (p) resolutions. Up to six subchannels can be transmitted over one digital channel; hence, the dot in the channel designation. See interlace.