Throughout the 1980s, AMD was a second-source supplier of Intel x86 CPUs, but in 1991, it introduced the 386-compatible Am386, an AMD-architected chip. With its own chip designs, AMD began to compete directly with Intel. Two years later, the Am486 was introduced, followed throughout the 1990s by the K5, K6 and Athlon families. In 2000, AMD introduced its value line of Duron chips, which were superseded by Sempron in 2004. All AMD-designed chips have been noted for their cool-running, innovative architectures.

In 2003, AMD debuted the Opteron for servers and high-end workstations, the first 64-bit x86-compatible CPU on the market. Opterons were followed by 64-bit Athlon chips for the desktop, and Microsoft announced support for the 64-bit extensions. Over the years, numerous PC vendors, both small and large, have successfully used millions of AMD's CPU chips in their PCs.

In 2017, the Ryzen family of CPUs and the EPYC family of server CPUs were introduced. Always Intel's major competitor, by 2021, AMD had garnered 40% of the CPU market.

AMD had always made its own chips but later spun off its chip manufacturing into Globalfoundries, which makes chips for AMD and others (see GlobalFoundries). See Ryzen, EPYC, Athlon, Opteron, Duron, Sempron, Geode, AMD64, K5, K6, Am486 and Am386. 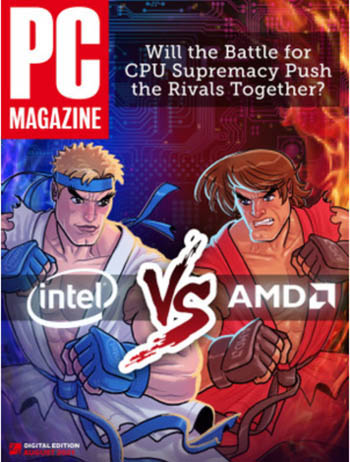 For decades, AMD and Intel have been battling it out with each company eclipsing the other at different times due to speed, cost or features. It is ongoing; witness this August 2021 issue of PC Magazine. (Image courtesy of PCMag.com)