Not trusted. The term trustless often refers to Bitcoin, Ethereum and other blockchain-based networks because the thousands of third parties that validate and mine the transactions are essentially unknown to each other and therefore cannot be trusted. In contrast, although many people may not concur, a "trusted" entity is a bank or credit card company because they are well known and monitored by government agencies.

Doesn't It Really Mean the Opposite?
The trustless term applied to blockchains is rather confusing and contradictory because the whole point of the blockchain architecture is to ensure that no alteration has taken place to existing transactions. The blockchain protocol is designed to maintain the integrity of the system, which means that the blockchain is indeed trusted. Clear naming of concepts in the world of technology is rarely a major priority (see naming fiascos). See blockchain, consensus mechanism, permissionless and crypto glossary. 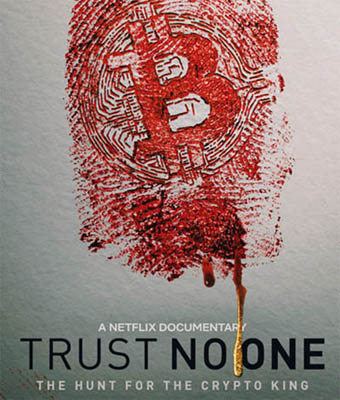 Netflix released this documentary in 2022 about the founder of a Canadian crypto exchange who died in 2019, and $200 million in customers' bitcoins disappeared shortly after (see Quadriga). (Image courtesy of Netflix.)