(2) A network that relies on all nodes to propagate signals. Although the wireless signal may start at a base station (access point) attached to a wired network, a wireless mesh network extends the transmission distance by relaying the signal from one computer to another. Used on the battlefield to provide path diversity, it is also used for sensor networks and personal computers. See mobile ad hoc network, 802.11 and wireless LAN.

When laptops are set up in a wireless mesh, they act as routers for each other.


(3) A network that provides Wi-Fi connectivity within an urban or suburban environment. It comprises "mesh routers," which are a combination base station (access point) and router in one device. Also called "mesh nodes," they are typically installed on street light poles, from which they obtain their power.

Access Point and Backhaul Router
Like any Wi-Fi access point, the access point in the mesh router communicates with the mobile users in the area. The backhaul side of the device relays the traffic from router to router wirelessly until it reaches a gateway that connects to the Internet or other private network mostly via a wired connection, but that could also be wireless.

Routing Algorithms
A major benefit of wireless mesh networks is path diversity, which provides many routes to the Internet in case one of the routers fails or its transmission path is temporarily blocked. The choice in routing algorithm is critical, and numerous mesh algorithms have been used over the years. 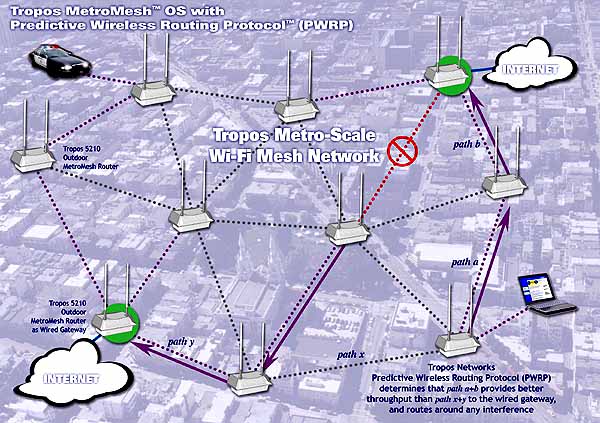 This simulated example from Tropos Networks is overlaid onto an aerial map to show how mesh routers are used in a metropolitan environment. (Image courtesy of Tropos Networks, Inc., www.tropos.com) 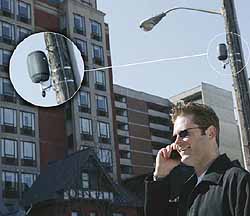 Depending on foliage and topography, up to 20 mesh routers are mounted on light poles per square mile. In this example, the man is making a Wi-Fi voice call between his VoWi-Fi phone and a Wireless Multi-Service Switch Router. (Image courtesy of Ericsson, www.ericsson.com)